We are very excited to feature this months Minnesota Clarinetist Sang Yoon Kim! 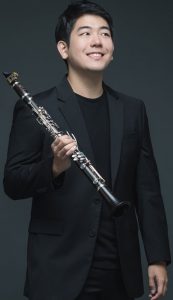 As a passionate orchestra player, he has played as the guest principal clarinet of The Cleveland Orchestra and the London Philharmonic, with Vladimir Jurowski, Christoph Eschenbach, Franz-Welser Most and Jaap Van Zweden. He made his debut at the Prague Spring International Festival in 2016 as a soloist with the BBC Symphony Orchestra under the baton of their Music Director, Sakari Oramo.

A graduate of the Conservatoire de Paris, where he was accepted as the first Korean clarinetist in the school's history, he studied with distinguished professors Michel Arrignon and Pascal Moragues. After Paris he went on to study in Los Angeles at the Colburn Conservatory of Music, gaining an artist diploma under Yehuda Gilad in 2014. He served as Young Artist in Residence with Classical Minnesota Public Radio in 2013.

Learn more about Sang Yoon's clarinet beginnings along with his current approach to life during COVID-19 during an interview with clarinet specialists Tori Okwabi and Amelia Smith.

Want to challenge your playing and win gift certificates or prizes?

Kegelduett No. 2 for 2 Bb Clarinets by Wolfgang Mozart

Play 2nd part and all repeats

2. Download the music, use headphones to listen to the 1st clarinet part as you record yours (and to help minimize background noise).

3. Record in good lighting  and with your device in vertical view. This allows us to easily put the duet together and repost for you.

4. If possible, stay at least a foot away from the recording device to prevent overpowering the audio input. 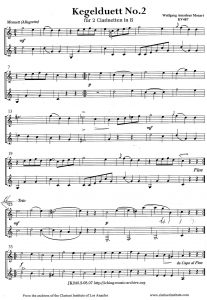 Stay tuned for our next featured Minnesota Artist in November 2020!